We just purchased two livestock guardian dogs (LGDs). They are a mix of Great Pyrenees and Anatolian Shepherd. It amazes me that they instinctively know what to do. They are only 8 weeks old but they already show signs of guarding. Especially their food! 😉 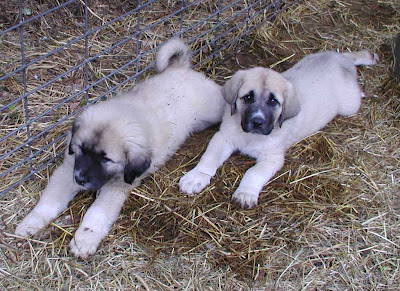 We decided to purchase LGDs because we want to run ducks with the goats. Last year we bought 15 ducklings and raised them in a pen near the house until they were big enough to go into the pasture. After we put them in the pasture, half of them escaped underneath the gate and half of them were killed by a predator – one duck each night until they were gone. That is why we bought LGDs.

The puppies are in training in the kidding pen with the new mommas right here beside the house so we can keep a close eye on them, and we have a new batch of 10 ducklings that should be ready to put in the pasture about the same time as the dogs.

The dogs already have experience with chickens so I think they will do alright with the ducks. We’ll introduce them by putting the ducks in a cage right next to the kidding pen. When the ducklings are a little bigger, we’ll put them in the kidding pen. Then we’ll move them all to the pasture.

Are you wondering why we would go through so much trouble and expense just to keep some ducks? Click here to find out.