This is an excerpt from the Wall Street Journal. I couldn’t resist posting it since I’m a knitter and Brett’s a truck driver. Maybe after reading this he’ll become interested in knitting! Here’s a link to the complete article: http://bit.ly/TruckerKnitter 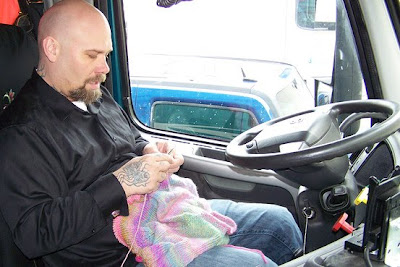 Some truckers are finding themselves with more spare time on the road. Loads of goods delivered by truckers fell 15% in 2009, to 170 million loads, the largest drop in modern history, said Bob Costello, chief economist for the American Trucking Associations.

With declining freight, truckers who drive hundreds of miles to make a delivery may not immediately have a load lined up for the return trip. So they bide time at truck stops, where they can shower, dine and sleep in their rigs. A couple of years ago, a driver might drop off a load and pick up a new one in two hours; now the wait can be two days, said Mr. Costello.

Kevin Abraham-Banks, a 37-year-old trucker with a shaved head and dragon tattoos, passes time at truck stops with his cocoa and knitting.

Mr. Banks, who lives in Sioux Falls, S.D., and hauls romaine lettuce between California and the Midwest, learned to knit last year after load-volumes slowed. Creating something tangible beats sitting around the truck stop “talking about who has a bigger radio,” he said. He’s finished a scarf and socks, and is working on a sweater for his wife.

“The fact that you can take strands of thread and basically make something out of it, that’s awesome I think,” he said. “It’s pretty cool stuff, man.”