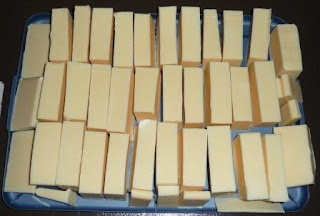 I never thought I would make lye soap, but that is exactly what we did the other day. It all started with raising pigs and the butcher telling me that you can make soap with lard (melted pig fat). So I took many pounds of frozen pig fat home and made lard. You can read about that in this post.

The only ingredients in lye soap are water, lye and lard. Other ingredients can be added for fragrance and lather but they are not necessary. We bought lye at our local farm store.

It was an easy process. Just combine lye with water and when it cools to about room temperature pour the melted lard into it and stir until it is well combined. Pour into a mold (we used a plastic sweater box) and let it cool completely. The next day cut it into bars. A few days later dump the soap out of the mold and let it cure (air dry) for 6 months. That’s it. (If you want to try this at home, Google “How to make lye soap” for more specific instructions.)

We didn’t wait 6 months. I started using our soap about a week after we made it. Lye soap is not like store bought soap. In many ways it is better. It has a very high concentration of glycerin so it is great for your skin.

Commercial soap makers strip a lot of the glycerin out of their soap to use in other products. They also add agents to make the soap lather but, contrary to popular belief, it is not the lather that cleans you.

I always thought that lye soap was harsh but that is not true unless you use too much lye. In the old days before lye was commercially available, people made lye water by straining water through wood ashes. It was not an exact science so sometimes the lye was too strong and the soap was harsh.

Another great benefit of making your own soap is that it is cheap. The only direct cost we incurred was for the lye, which cost about $6.50 and made 30 bars. That’s about 22 cents per bar. I don’t know how much it would cost if we had to buy the lard.

I almost forgot to tell you what scent we made! I’m calling it Country Breakfast because I scorched the lard so it smelled like bacon grease. I added orange zest, cinnamon, and vanilla to try to diminish the bacon smell but it didn’t work. We won’t use it in the shower but it won’t go to waste. We can still use it to wash our hands and for general purpose cleaning.