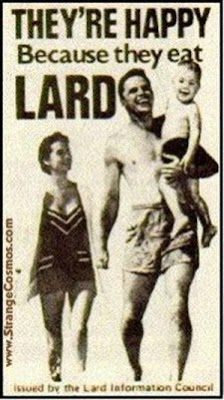 Pigs were our first farm animals. We received 2 free piglets from a pig farmer who didn’t want to fuss with bottle feeding them. After raising them to a good weight, we had them butchered. We sold one and kept the other for ourselves.

When the butcher asked if we wanted the fat, I asked him what we would do with it. I think he was kind of amused that this city girl didn’t know, but he respectfully told me that we could make lard. The only thing I knew about lard was that people used to use it instead of shortening, so I asked him what I would do with all that lard and he said, “make soap”.
Shortly after we received our pork, I made a batch of lard and it turned out perfectly. I froze some of it and kept some in the fridge to use for cooking.
When we decided to make soap recently, I dug out the rest of the fat from the freezer and made another batch of lard but I think I scorched it because, rather than being white and odorless, it was off-white and smelled like bacon grease.
Rendering lard is actually very easy. You just put a little water in the bottom of a pot, add chunks of fat and cook it slowly. As you cook it, the water evaporates and the fat melts.
In that fat are little pieces of meat that become deep fried. They are called cracklings and are quite tasty and terribly fattening (like all good food!). As the fat melts, the cracklings rise to the top. The lard is done when they settle back down to the bottom. The cracklings are what got scorched in my last batch of lard.
When the crackling sink, strain the lard through cheese cloth or a coffee filter to separate it from the cracklings. In liquid form lard is yellowish but it cools to white. It can be stored in the refridgerator or freezer. For more specific instructions on rendering lard, click here.
While researching how to render lard, I stumbled upon some surprising information on how healthy lard is. That’s right, HEALTHY… at least compared to most of the fats you find at the grocery store.
Stayed tuned for my post about making lye soap. If you’ve never made it, you’ll be surprised how easy it is and how great the soap is. The only ingredients are lard, water and lye. Other ingredients can be added to promote lather or add fragrance, but they are not necessary.