On June 20, 2011, our area was hit hard by a flash flood. I don’t know the official readings, but one neighbor told us he collected 7” of rain in his gauge in 4 hours. Another neighbor told us 9” for the day. We live along Blairs Creek and had at least 4’ of water in our pastures and 3’ in our barn. Yes, feet, not inches.

Fortunately our home, store and vehicles were not affected. However, we lost 7 goats, our pasture fencing was destroyed and about half of our hay was ruined.

I awoke around 3:30 am that morning to the thunderous roar of rain and hail on our tin roof. It was the heaviest rain I had heard since we moved here but I didn’t give it a second thought and I went back to sleep. The electricity had gone off and my alarm didn’t ring so I did not wake up again until 8:30 am.

I realized that something was very wrong the first time I looked out the window. There was water everywhere so I rushed to get dressed, put on my rain boots and went outside. Then I just stood there. What does one do when one finds a creek where the road used to be?

The water had obviously receded from its high point, but there was still A LOT of water. Questions ran through my head: Was it safe to walk in? Could I drive our truck in it? Were the animal OK? Could I get to them? What would I do if I did? Where’s my camera? 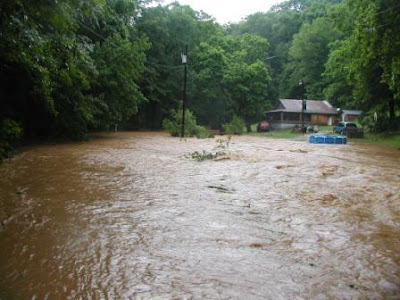 The road outside our front door, looking toward the barn

Did I mention I was home alone?

I ran inside and grabbed my keys and camera. The water on the road was about 8” deep so I took the truck and headed down the road but I didn’t even get to the barn before the water was a foot deep and there was a tree across the road.

Our neighbors came out and walked to the barn with me. We saw 1 goat kid and our 2 livestock guardian puppies on top of a wood pile. There had been 8 goats in the barnyard. The gate was wedged shut with debris and the water was at least 2 feet deep in the barnyard. So we left them there momentarily to go check on the bucks. 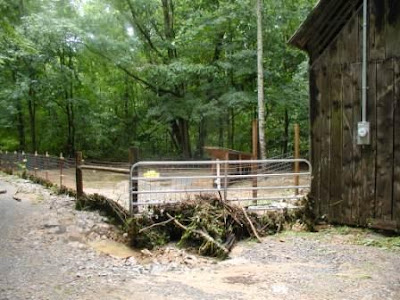 The barnyard, after the water receded

We walked a few hundred yards down the road until the water was up to our thighs and the current was so strong it almost knocked me over. We could not get to the bucks. Another neighbor who lives on the other side of the creek could see part of our pasture and told us he could see one buck. That was reassuring and disconcerting at the same time. There were 6 bucks in that pasture. Were they OK? Maybe, maybe not. We would have to wait until the water receded to find out.

Our neighbor, Charlie, climbed the gate to rescue the kid and pups. Amazingly, he found 3 more surviving goats behind the barn. After moving them to a safer area, I drove down to the girl’s pasture. A neighbor had come by on his tractor and moved the downed tree.

I was thrilled to find all of the animals in that pasture were safe. But the fencing was ruined so I had to find a new home for them quick. It was around 11 am when I called a farmer friend. Within an hour, he sent a large stock trailer and 2 men to help move the animals. With the help of 4 neighbors, we rounded up all the surviving animals and moved them to a barnyard behind our vet’s office, about 10 minutes away. 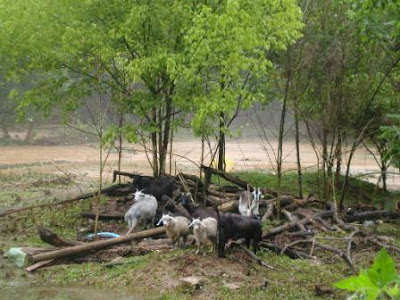 We were still not able to get to the bucks but we heard from other neighbors that they could see at least 3 survivors. Brett got home just in time to help me catch the bucks. By 2:00 pm the waters had receded enough that we could finally get to the buck pasture. Indeed, there were 3 survivors but 3 were missing. We loaded the surviving bucks into pens in the back of our truck and took them to the vet’s office, hoping that they would have a place that we could keep them. Thankfully, they had a large empty stall in their barn.

It was 6 pm before we had the animals all settled and fed. Brett and I headed to a friend’s house to shower because our electricity was still out. After we got cleaned up, we went out to eat and headed back home. By then, the electric was back on. Exhausted by the physical and emotional strain of the day, we went to bed after talking briefly about what to do now. We ended the day like I started the day: with more questions than answers. 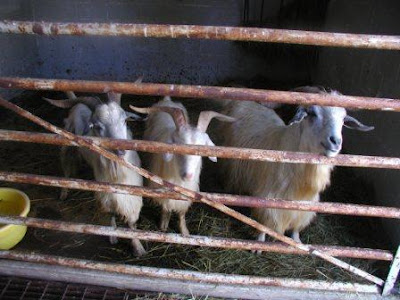 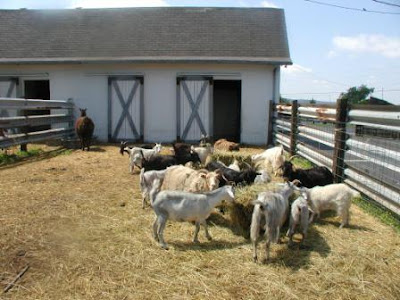 Settled in their temporary (and dry) new home

Check back over the coming days and weeks as I update this blog on our flood recovery.